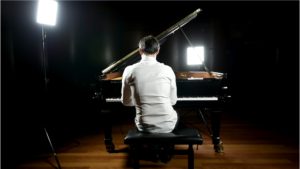 Aberdeenshire has welcomed classical pianist Ivan Ilic to the area on previous occasions and it is testament to his popularity that he is back at Inverurie Town Hall on Saturday November 17th. He will exercise the Council’s seldom-seen grand piano at his only concert in Scotland this season. In this concert “in-the-round” an intimate atmosphere and good sight-lines can be expected to hear music by Haydn, Beethoven, Grieg and Reicha. Ivan has recently recorded works by Anton Reicha (1770 – 1836) on the Chandos label to critical acclaim in the musical press. A Czechborn naturalised French composer Reicha was a contemporary and lifelong friend of Beethoven. Reicha’s pupils included Franz Liszt and Hector Berlioz. Concertgoers will also hear the Scottish premiere of “Capture Sweetness” (2018) written for Ivan by Keeril Makan. Ivan achieved degrees in mathematics and music at the University of California Berkeley and later pursued graduate studies at the Conservatoire de Paris, earning a Premier Prix. He has played at major concert halls including Carnegie Hall and the Wigmore Hall and he is currently musician in residence at Ulster University. He will be giving two schools workshops whilst here, at Alford and Oldmeldrum Academies respectively, before returning to his home in Paris. This is the third of an increasingly popular series of classical music concerts promoted by Inverurie Music, a local music charity bringing top-class musicians to the area. Tickets at £12 (£10 concessions and £1.00 for students and children) are available at the door or can be reserved by by calling 07821615131 or emailing inveruriemusic@gmail.com. Doors are open at 7.30pm.