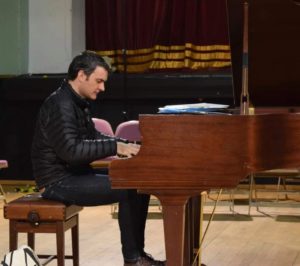 Artistically speaking, what makes a really successful concert? Ivan Ilic is a believer in the importance of the audience. In his fifth recital for Inverurie Music, he paid tribute to the audience for their concentration and appreciation in a well-filled Town Hall last Saturday. They were also able to thank him and ask questions after the concert when he made himself available at the back of the hall.

The concert comprised pieces by five composers spanning two centuries. He shifted from the sensuous tone painting of the modern era to the architectural precision of the classical repertoire and then to the drama and folklore of the romantic period. As is his habit, he played the entire programme from memory.

In his warm and witty style, Ivan introduced the pieces, enfolding the background, meaning and techniques. For example, with the Scottish premiere of ‘Capture Sweetness’ by Keeril Makan, he advised the audience to be aware of the “afterglow” of the chords. In the Haydn Sonata no 60 with its cheeky interruptions and leaps, we were told that it was specially written for a pupil, a talented banker’s daughter.

Ivan has made a special study of the works of Antoine Reicha, a Czech who was largely self-taught and was a contemporary of Beethoven. His work is almost unknown. We were treated to two etudes and an encore. The contrapuntal texture suited Ivan’s precise and even touch. Like the fugues of JS Bach, the listener was driven by the logic of the structure and the end seemed like the final part of a mathematical equation. Interestingly, both Ivan and Reicha studied Mathematics at a high level.

Beethoven was one of Haydn’s pupils and he regarded him as his major teaching achievement. In the ‘Pathetique’ Sonata no 89 in C minor, Beethoven took the piano of his day to the limits. This virtuosic display showed Ivan’s mastery of the piece- not only technical precision- but expressive power held in reserve like the contrasts of simplicity and flourish in the final Rondo.

The second half of the concert was devoted to Grieg’s Lyric Pieces. These popular pieces produced many a familiar smile from the audience.  Ivan jokingly referred to them as misdeeds of his youth. However, we were glad that he adjusted himself into adult mode to capture entirely the different moods and delights in the set. Bravo Ivan!

The audience showed their appreciation of the pieces and the Reicha encore, applauding warmly.