Duo Diez, Violeta Barreña (violin) and Dimitris Dekavallas (guitar), gave an exciting and varied concert for IM at the Chapel of Garioch Church on Saturday. They call themselves after two Spanish words- duo for two and diez for ten (strings) and have recently launched their debut album, ‘From Granada to Buenos Aires’. Their music encompasses the street and dance music of Spain and Latin America. The concert also included more lyrical pieces, including the plaintive ‘A Lovers Plea’ by local composer John Hearne (arr. Violeta Barreña), which co-incidentally was first performed at Chapel of Garioch in 2002.

The audience were ushered into the mood of the concert with a joyful selection of arrangements of music by Ferdinand Garcia Lorco (1898-1936), ‘Cantiones Españolas Antiguas’. Although he is remembered today mostly as a poet and playwright, Lorca was persuaded by his friends to also compose some music.

The tango that originated in Argentina (supposedly from African slaves) developed in the barrios of Buenos Aires as a hybrid of European and folk styles. It became a dance craze that invaded the ballrooms of the world about a century ago. Astor Piazzola  (1921-1992) was at the vanguard of the genre, introducing elements of jazz and classical music into his compositions. Duo Diez played three of his compositions, including the popular ‘Libertango’. Duo Diez made much with their slender resources, with Dimitris’s guitar providing the gentle tango rhythm on the body of the guitar as well as the subtle counter-melodies.

The performance was pushed up a gear with Spanish dances; one by the virtuoso violinist, Pablo Sarasate (1844-1908), Manuel de Falla (1876-1946) and an anonymous composer. The “tap dance” was delivered at a break-neck (break-heel?) speed with Dimitris anchoring the tempo, while Violetta whistled into the top register. The register of the audience’s applause also increased in volume accordingly.

We were transported back across the Atlantic to Brazil to indulge in the music of Heitor Villa-Lobos, one of the most prolific composers of all time. This showed the duo in a more expressive and arresting mood with ‘Bachianas Brasileiras no 5 and ‘Distribucion des Flores.’ The duo rounded off the programme with their composition “From Spain”, and as an encore played a Flamenco piece,‘Pico Dico.’ Once again Duo Diez gave a display of amazing virtuosity, musicality and energy, gratefully acknowledged by the audience.

This is the last concert of the 2014-2015 season for Inverurie Music. The first concert of next season will not not billed until October, but we hope to inform you about it in early September. Keep an eye on the website for details: www.inveruriemusic.co.uk. 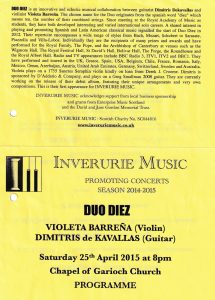