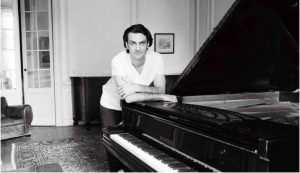 On Saturday 25th October, the knowledgeable and virtuoso pianist, Ivan Ilić, gave his fourth recital with Inverurie Music at Kemnay Church Centre. The recital was part of the Sound Festival, which promotes and performs contemporary music. Ivan is a good ambassador for the “new music” scene, collaborating with other art forms, such as film and visual arts. He also he writes for the websites of ‘The Gramophone’ and ‘Music and Literature.’

Can music be completely original? Philosophers seeking the origin of music identify the womb as the seat of music, where the mother’s heartbeat and its gentle rocking motion are sealed within us as an inner pulse. The rocking and heartbeat continue as a comforter into infancy in the arms of our parents. If we accept this idea of its origin, we are all born with the basic elements of music. In an introductory talk, Ivan eruditely explored the theme of originality much further. How does the transfer of style or colour happen between composers? He explained the process whereby one composer might influence another, but then might transform his compositions into a new “musical language.”

The concert consisted of over thirty pieces, all played from memory, but the mainstay was a set of works by Chopin followed by a set by Scriabin. We were left to judge for ourselves how much Chopin there was in Scriabin. Ivan handled Chopin’s style masterfully, letting the music speak for itself. Chopin, as an “original” composer, is highly distinctive with his rhapsodic interludes and spiritual drift, especially in the Nocturnes. Perhaps this spiritual quality was something that the Russian composer, Scriabin, seemed to inherit. Ivan played all eighteen Preludes and the first of the ‘Garlands’, these compositions echoing the changes of mood that characterise Chopin’s Preludes.

This was followed by two contemporary pieces that showed how different styles of composition can be in the 21st Century:  Scott Wollschleger’s ‘Music Without Metaphore’ and John Metcalf’s ‘Chant.’ The first was impressionist and atonal , while the latter was more architectural and tonal.

After the interval, the concert had a theme and variations flavour with two pieces by Beethoven and six fugues by Anton Reicha, one of Beethoven’s contemporaries who composed a phenomenal amount of, as yet mostly unheard, music. Here technical mastery of the piano was prominent. Ivan tackled the challenge of balance and clarity in a grand virtuosic display that was warmly appreciated by the audience.