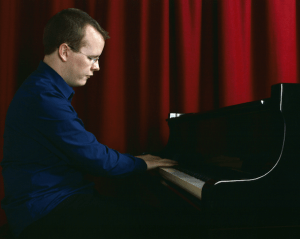 At Kemnay Church Centre on Saturday, Christopher Baxter performed a varied and well-devised programme of music on Saturday at the Church Centre. This was his second visit to Kemnay, having previously performed with Tom Poulsen (trumpet) as the Brass Diversions Duo two and a half years ago. The programme featured a series of six pieces by local composer John Hearne and, as a request, the audience was invited to make up titles for them.

Christopher opened with a piece by John Adams (b. 1947), a pioneer of “minimalist” music. This style might be more familiar to us today in film music like the riveting synthesizer score in the ‘Terminator.’ It has a great deal of repetition, which might suggest the cyber world of machines. However, Adams’s piece could be interpreted in a number of ways. Christopher’s evenness of touch and delicate shifts of variation were reminiscent of a landscape or skyscape. After a while, the music became almost hypnotic, requiring great skill and concentration from the performer.

As Christopher pointed out, Beethoven was not only a great innovator with music, but also with the piano itself, stretching the limits of the instrument to the absolute. In the “Waldstein” Sonata, the hands are far apart, dealing out the themes like the separate sections of an orchestra. It would be easy for the excitement of this piece to take over, but it was controlled with masterful clarity. An effective contrast to this was the lyrical ‘Sonetto 123 del Petarca’ by Liszt.

After the interval, the first performance of all six pieces of the Pictograms took place, first composed in 2007. In an unusual extension of audience participation, the listeners were asked to think about what each ‘pictogram’ might be. This was not as difficult as it might seem, for many seemed to be transfused with the landscape. These were shaped with tenderness and in its wilder moments, vivid displays of virtuosity.

In a set of pieces that he clearly loved to play, Christopher concluded the recital with Brahms’s Klavierstück Op119, which was the last set of six pieces that Brahms composed for solo piano. Brahms music was both complex in structure and lyrically melodic, qualities that were communicated with the highest degree of skill and musical understanding.

Christopher Baxter comes from Aberdeen. He graduated from the RAMD Glasgow with a B.Mus (1st Class Honours) and a M.Mus (Distinction). He has recently taken up a post as piano teacher and accompanist at Kilgraston School in Perthshire, and is a pianist on the Live Music Now scheme. He is in constant demand as a soloist, accompanist and chamber musician. 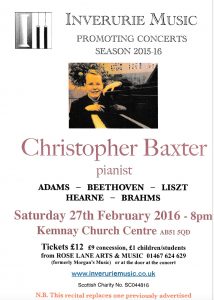 Inverurie Music is a registered charity (SCO44816). The next concert will be with Atheneum Winds (a Wind Quintet) on 19th March in the Acorn Centre in Inverurie at 8pm. Further details are available here