Ivan Ilić travelled to Oldmeldrum on 16th November 2018 to inspire young musicians with his playing and his insights into his musical world. Ivan answered questions in a modest, frank and encouraging style. There were two groups of about 50-60 pupils involved during the course of the afternoon. One of the pupils played the film score music theme of “Live and Let Die.” Ivan also played some of his repertoire, previewing his concert at Inverurie Town Hall on Saturday 17th November 2018, which the pupils were encouraged to attend for the bargain price of £1 per student. 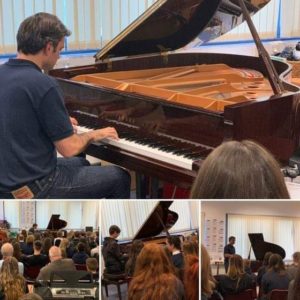