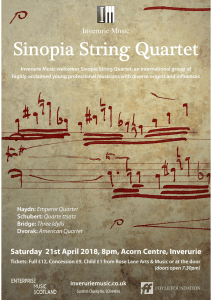 Some of us at Inverurie Music’s concert on Saturday last were recalling words from John Newton’s hymn during Haydn’s Emperor Quartet, the source of the hymn-tune. “Grace which, like the Lord, the giver, never fails from age to age”. The splendid Sinopia Quartet, replete with violist Elaine Koene originally from Turriff, played a delicious concert full of memorable tunes and harmonies. From 18th century Haydn, through Schubert’s exciting Quartettsatz to Frank Bridge’s Three Idylls, and the terrific American Quartet by Dvorak, the vigorous youthful ensemble were unfailingly graceful and warmly engaged with each other. The performance was as inspiring as it was entertaining. The dynamics in the Haydn slow movement were lovely with delightful sensitivity in the violin variation particularly from Daniel Meszoly and then, later, with moving downward shifts from Elaine’s viola. The last variation had a haunting ethereal quality. The first violin sparkled as Gabi Maas rose to the virtuosic challenge of the Presto with both crisply efficient and also gently moving interludes. Laura Sergeant, cello, let rip in the third Bridge Idyll clearly enjoying the underpinning rhythmic intensity as the other players passed the music around. Dvorak wrote the American Quartet just after his 9th Symphony “From the New World” and echoes of melodic themes from this can be heard. Some commentators find no specific American flavour to this music but slow travel across big open country is surely suggested in the Lento movement where a lilting rhythm bespeaks grand vistas of hopeful promise yet wistful reflection upon a life left behind—much as Dvorak himself had left Europe behind. The railroad is evoked in the last movement with mechanical precision and beautifully balanced lyrical lines. The ensemble playing was excellent with evidence of frequent sympathetic communication between the players. The audience was very happy and many positive comments could be heard above newer thumping rhythms as we all stepped blinking from the Acorn Centre into the bustling Saturday night street-life of downtown Inverurie.

Previous StoryNational Lottery ‘Awards for All’ success!
Next StoryVenues for Inverurie Music Concerts