The Aberdeen Chamber Orchestra was founded in 1982 by a group of friends who had known each other at school and university in the city. The idea was to promote a small-scale concert for the enjoyment of the players, friends and relatives. The concert was such a success that the members decided that they wanted to meet again and thus the Chamber Orchestra was born. Since then, the ACO has gone on to establish itself at the forefront of amateur orchestral playing in Aberdeen.

In its earlier days, the ACO restricted itself to the smaller classical orchestral works, with the occasional brave excursion into the Romantic. There was no permanent conductor and the committee decided whom to invite as conductor for each concert. There were, and still are, a number of excellent orchestral conductors in the region, but this approach did not produce the consistency and growth that the members were looking for. However, after a particularly successful series of concerts in the year 2000, it was proposed that the orchestra should have a formal constitution and an established conductor. We were fortunate that Gareth John was available and willing to take on the task, and at the same time Julian Marx became the leader.

These moves established a firmer basis for the ACO, produced stability, and allowed us to plan our concerts well ahead. It also encouraged a more adventurous approach to programming, so that the orchestra’s repertoire can now claim to be fully symphonic, with recent programmes including major symphonies by Borodin and Dvorak, as well as the performance of concertos for piano, flute and violin, and operatic excerpts. The ACO has established a close relationship with the Royal Scottish Academy of Music and Drama in Glasgow, who have provided us with a number of excellent soloists, and we hope to be able to continue to provide performance opportunities in Aberdeen for RSAMD students and postgraduates.

He is much in demand as a recital and chamber music performer and directs the Deveron Festival, a classical music festival held each June in Banff. 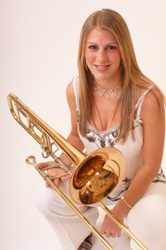 Arlene MacFarlane began playing the trombone at the age of 11 and quickly joined a very prestigious fourth section brass band in her local area.

In 1996 Arlene joined the brass department of the Junior Royal Scottish Academy of Music and Drama under the tuition of Alistair Sinclair and Maurice Temple.

As a youngster she became a member of the National Youth Orchestra of Scotland, where she spent four happy, eventful years. Throughout her youth she was also a member of the West Lothian Schools Brass Band, performing in venues such as the Sydney Opera House and a tour of Minneapolis USA.

Arlene went on to study at the Royal Scottish Academy of Music and Drama under the watchful eye of Kevin Thomson, Lance Green, Peter Oram and Simon Johnston.

Arlene has also appeared as a soloist on several occasions and has worked with prestigious chamber groups such as The Golden Section and Bones Apart. 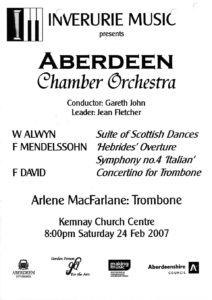