Renowned as an intercultural pioneer, Simon forges and explores new genres by combining his knowledge and love of music from every corner of the globe: impassioned romances of the Judeo-Spanish Sephardim; the exotic modality of the Middle East; pulsating rhythms from East Africa; colourful ragas of India and South Asia; the legendary Cantiga “miracle songs” of 13th century Spanish King Alfonso X excitingly reimagined with jazz and world influences; the distinctive melodies and time cycles of Afghanistan, merging each with his own musical language, which draws on contemporary sounds and the incredible musical experiences of all four performers.

Presentation is relaxed, informal and peppered with a healthy dose of Simon’s inimitable humour.

Four musicians who, in the service of musical expression, wear their virtuosity lightly… an evening as unique as it is diverse. (Bachtrack.com)

Stars of the show were guitarist Simon Thacker with his jazz quartet Camerata Ritmata, who brought striking energy and wit to an unusual and eclectic couple of sets… what unified these contrasting pieces were the group’s tight ensemble and driving rhythmic energy… A couple of numbers based on the medieval Cantigas de Santa Maria combined ancient-sounding bare harmonies with beautifully liquid playing from Thacker, and his Alim Qasimov arrangement became a funky, exotic-sounding romp. (The Scotsman)

Camerata Ritmata’s incomparable programmes fuse some of the most powerful sounds from across continents and epochs with visceral jazz improvisation, the flair for sound of classical music and a highly distinctive and affecting compositional style, taking audiences on unique and fascinating musical journeys across the world, exploring cultures through accessible and immediate new music. 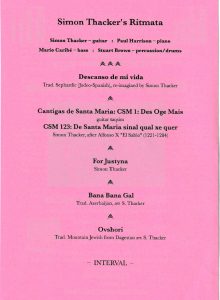 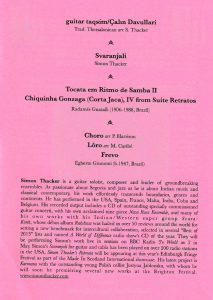