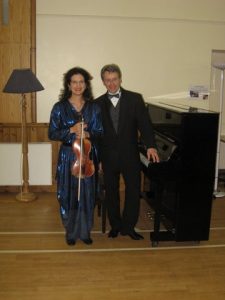 Madeleine Mitchell is “one of Britain’s liveliest musical forces and foremost violinists” (The Times). She has performed in over 40 countries as a soloist in a wide repertoire in major venues and frequently broadcasts for television and radio including the BBC Proms, ABC (Australia), Bayerisher Rundfunk and for Italian TV when she won the Palmo d’Oro competition in Liguria.

Madeleine Mitchell has performed concertos with major orchestras including the St Petersburg Philharmonic, Czech and Polish Radio Symphony, Wurttemberg and Munich Chamber, the Royal Philharmonic and other London orchestras, Orchestra de Bahia Brazil and for the BBC. She returned to the Bath International Festival as soloist in the Great Brits programme celebrating HM the Queen’s Jubilee in June. May 2013 sees her return to the Canberra International Festival as Artist-in-Residence, including Vaughan Williams’ The Lark Ascending.

Madeleine Mitchell is well known for her recitals and for her imaginative programming. The Herald described her a “a violinist in a million” after her recital in Glasgow. She represented Britain in both the festival UKinNY with a recital at Lincoln Center and for the centenary of Entente Cordiale with France. Mitchell has given recitals at Sydney Opera House, Seoul Center for the Arts and Hong Kong — part of a 3 month world tour supported by the British Council, played at many international festivals and frequently in London. In 2011 Madeleine Mitchell won the GBSF award for her recitals with pianist Noriko Ogawa in festivals and she has collaborated with many outstanding artists. In 2012 she made a tour of the USA.

Mitchell’s acclaimed discography includes albums shortlisted for Grammy and BBC Music Awards of works written for her by some of the UK’s best known composers including MacMillan and Nyman: In Sunlight: Pieces for Madeleine Mitchell and FiddleSticks — her collaboration with percussionists Ensemble Bash, supported by Arts Council England, as well as 2 albums for Naxos of music by Alwyn and Howard Blake, Violin Songs — including Elgar and Bridge, selected as Classic FM’s CD of the week, British Treasures — early 20th century romantic violin sonatas, Hummel violin sonatas and the widely recommended Messiaen Quartet for the End of Time with Joanna MacGregor. This Autumn she records MacMillan’s motet with solo violin for Linn.

A highly creative personality, she devised the Red Violin Festival under Lord Menuhin’s patronage, the first international eclectic celebration of the fiddle across the arts for which she was shortlisted for both European Women of Achievement and Creative Briton Awards. She is also Director of the London Chamber Ensemble.

Madeleine Mitchell was awarded the Tagore Gold Medal by HM the Queen Mother as Foundation Scholar at the Royal College of Music where she is now a Professor part-time. As Fulbright/ITT Fellow she gained a master’s degree in New York studying with DeLay, Weilerstein and Rosenberg at the Eastman and Juilliard schools. She gives master classes worldwide and is on the faculty of the Orfeo International Summer Music Festival in the Italian Alps.

Nigel Clayton studied with Stephen Savage and Angus Morrison at the Royal College of Music, London, where he won prizes in every category of piano performance and was awarded the College’s yearly prize for his Bachelor of Music Degree. Whilst there, a particular interest in chamber music and accompanying developed and was further encouraged by international prizes from competitions in London, New York (Concert Artists Guild) and from the English Speaking Union. Since then his worldwide travel has included Japan, Taiwan, four major tours of India, Sri Lanka and Pakistan with the Indian cellist Anup Kumar Biswas, tours of the Middle East and America with Wissam Boustany, of Scandinavia with Gerard LeFeuvre and throughout every European country. He performs more than eighty concerts every season and has also played at most of the music clubs and festivals in his native Great Britain, appearing regularly on the BBC’s radio network, at the Wigmore Hall and at the South Bank Centre, where he has already performed over fifty recitals. Nigel also continues to perform as a concerto soloist and has given more than one hundred solo recitals on board the British cruise liners.

Apart from several long standing partnerships, Nigel has appeared alongside such artists as Michael Collins, Sylvia Marcovici, Ofra Harnoy, Tasmin Little and Bryan Rayner Cook, the Chilingirian, Sorrel and Bingham Quartets and with instrumentalists from Japan, Korea, Canada, Spain, America, Poland and Iceland. He is engaged as Official Accompanist each year for the Tibor Varga International Violin Competition in Switzerland, and has recorded six commercial compact discs. He is Professor at the Royal College of Music, and visiting professor of piano at the North East of Scotland Music School.

These two internationally acclaimed performers celebrate the 150th anniversaries of both Debussy and Delius in this concert, alongside a new work by David Matthews written for Madeleine Mitchell and a work by local composer John Hearne. 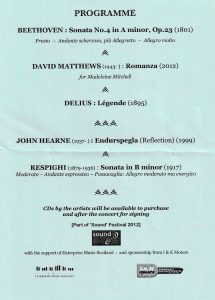 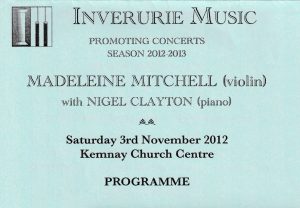 When Madeleine Mitchell commissioned this piece, she asked if I could write a Romanza, with its implications of lyricism and emotional warmth, and I readily agreed. This is my second piece with that title; the first was for cello and small orchestra, composed in 1990 for the Queen Mother’s 90th birthday. Madeleine also suggested that I might write two versions, one with piano and one with strings. Again, this seemed a good idea; I composed the piece initially for string orchestra and then made a reduction for piano.

The opening section is marked Andante appassionato. It contains two main ideas, the second more gentle and reflective. When I had brought this opening section to a natural close I was uncertain for some time what should come next. Then I read an essay by Bayan Northcott in which he points out how rare it is to find the 3/4 metre in contemporary music, whether serious or popular. He suggests that if composers want to do something fresh they should try reviving the waltz. I liked this idea and, as much of my opening section was already in triple time, it was easy to speed it up and for a waltz to emerge. This waltz forms a substantial middle section, after which the opening material returns, in a different form, before accelerating again to a distant reminiscence of the waltz. At the end, the waltz theme dissolves, leaving a final falling major second on the unaccompanied violin, the interval with which the piece begins.

I first met Madeleine in 1993 when I heard her play in a memorable performance of Messiaen’s Quatuor pour la fin du temps at the Malvern Festival. Since then I have heard her many times, so when last year she asked me to write a piece for her, it was a great help to know her playing style so intimately. It’s always good to be able to hear the person you are writing for playing your notes in your head while writing.