Terhi Jääskeläinen is one of the most talented pianists of her generation in Finland. She has performed in many of the most important Finnish music festivals and been successful in both national and international piano competitions. Terhi Jääskeläinen took her piano diploma at the Sibelius Academy with the highest possible marks in May 2001. After finishing her Master’s Thesis in October 2001, she became one of the youngest pianists ever to receive the title of Master of Music in Finland. After that, Terhi Jääskeläinen has continued her studies in Italy, at the Accademia pianistica Incontri col Maestro, where her teacher is Boris Petrushansky.

Terhi Jääskeläinen was a finalist and one of the top prize winners in the Scottish International Competition held in Glasgow in September 1998. There were 230 pianists in the auditions of the 1998 competition and Jääskeläinen was one of the youngest. Michael Tumelty wrote in the Herald: “Jääskeläinen’s Bartók Sonata – crisp, tight as a drum, and utterly lucid – was one of the best I’ve heard.” The CD Riches and Dreams in which Jääskeläinen played Ginastera was released in Britain by the Classical Recording Company. In 1999, Terhi Jääskeläinen was also among the winners of Helsingborg Symphony Orchestra Young Soloists’ Audition in Sweden. She also received a special prize for 2nd stage performance in the Leeds International Piano Competition.

One of the highlights of Jääskeläinen’s career was the concert in the Mikkeli International Music Festival 1994. Jääskeläinen played the Grieg Piano Concerto with the Kirov Orchestra conducted by Valery Gergiev. The concert won her glowing reviews in all the main Finnish newspapers. During her career, Jääskeläinen has performed in Finland, Denmark, Sweden, Germany, Holland, Great Britain and Italy. 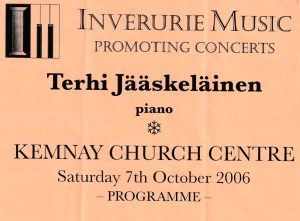