On Saturday evening, the Delmege Quartet gave a stirring performance that thrilled the audience in the crystal-clear acoustics of the Acorn Centre. Two of the players have family connections with Aberdeenshire, and on their third tour of the district, this was their first performance in Inverurie.

The musicians are final year students at the Royal Academy of Music and the Royal College of Music in London. They originally met at the National Youth Orchestra of Great Britain in 2008 and formed as a string quartet in 2011. The late John Delmege, who gave them their name, was a chamber music enthusiast whose family provided the quartet with a scholarship to study with the Maggini Quartet. Only last month, the Delmege Quartet won first prize at the York Chamber Music Competition.

The concert was given in the memory of Gavin Greig, a local “lad o pairts” who was distantly related to Edvard Grieg, the Norwegian composer. He is chiefly known today for the monumental folk song collection of over three thousand folk songs that was collected from Aberdeenshire singers in collaboration with his friend and tutor, the Rev. James Bruce Duncan. He was also a poet, playwright, novelist, conductor, musician and “Dominie” of Whitehill School near New Deer. He campaigned to have music in the Scottish school curriculum. Coming from an ordinary background, he gained scholarships and, after his MA degree, trained for the Free Church ministry, but gave it up and married his childhood sweetheart, Isabella Burgess, by whom he had nine children. He died in 1914.

The performance included quartets by Mozart and Brahms. In a captivating display of balance and lyricism, the Quartet gave new breath to these fine works. Their “togetherness” did not stop interesting features of the Mozart Quartet in D Minor emerging from the musical woodwork, such as the gently articulated triplets in the viola part. The Brahms String Quartet No. 3 in B flat major also upstaged the viola in good measure with its robust melodies, fiery interludes and swirls of folk dances. The quartet showed off Brahms as a master of contrast and texture with the violins’ sensitively caressed themes and the gently throbbing cross-rhythms of the cello.

John Hearne’s In Search of Strathspey was given its first performance. The composer described it as a “whimsical comment on the cross-over between classical and folk styles”. The dark opening in the lower strings gradually gave vent to a wilder tune with its raucous accompaniment. It was a tribute to Scott Skinner, the “Strathspey King” and the fiddle music edited by Gavin Greig. Before the composition was played, Kirsty Lovie, who is a native of Huntly, got the audience in the mood, entertaining them with an impromptu medley of fiddle tunes by Niel Gow and Scott Skinner.

The composition was premiered by Inverurie Music with financial support from Aberdeenshire Council through the “Be Part of the Picture” scheme. A display about the Greig-Duncan Folk Song Collection and a collection of fiddle music was also provided for the society with help from David Catto, local historian, and Aberdeenshire Library Service, showing the enormous treasure chest that is Aberdeenshire’s musical heritage. 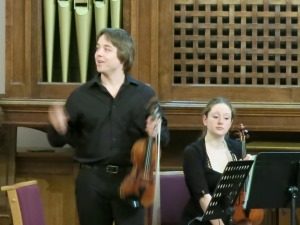 The next concert by Inverurie Music will be Camerata Ritmata with a world music/jazz fusion of style on Friday 11 April in Inverurie Town Hall at 8pm.

Review and photos by Alistair Massey