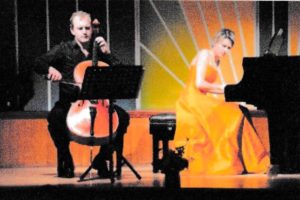 As part of the Sound Festival on October 25, 2014, Inverurie Music presented Duo con Certo, with Arta Arnicane (piano) and Florian Arnicans (cello) in Kemnay Church Centre. On her third visit to Kemnay, Arta brought her newly-wed husband to perform with her, featuring two romantic style composers from Eastern Europe, Chopin and Dohnányi.

The first half of the concert comprised two works by Dohnányi, Drei Stücke, Op 23, for Solo Piano and the Cello Sonata in B flat Major, Op 8. He was born in Pozsony in 1877, now Bratislava, capital of Slovakia. A child prodigy, he became renowned as a pianist and composer and respected as a teacher and administrator. However, as with many great artists, he was more concerned with his own ideas about his art than providing “politically correct” music. Accused by communist regimes as “bourgeois” and by Western modernists as outmoded, he forsook Europe after World War 2 and in 1949, took up a post at Tallahassee, in Florida State University.

In her introduction, Arta revealed how keen she was to play the rarely-heard Dohnányi pieces to a Scottish audience; the enthusiastic applause was both a measure of their appreciation and the duo’s mastery of the music. With the Sonata, written in Dohnányi’s youth, one could detect slight traces of Brahms and Liszt, but the young composer had developed a well-crafted style of his own. The mischievous Scherzo with its wayward them, demonstrated the musicianship and communication understood between the artists and Dohnányi’s wry sense of humour.

The second half of the programme opened with a contemporary piano piece by George Crumb (1929-) ‘Dream Music – (Love and Death Music) (Gemini)’. Crumb is an American composer and teacher who specialises in atmospheric and special effects.  Dream Music was an evocation that skilfully imitated the pattern of a dream. Chopin fragments arose from the wash of sound. At one point, Arta reached into the piano to strum the strings to produce a harp-like glissando.

The programme concluded with two pieces by Chopin, Sonata for Piano and Cello Op 65 and Polonaise Brillante for Piano and Cello Op 22. The Sonata was the last of Chopin’s works to be published in his lifetime. The duo was aware that the style of the master of the piano miniature had been extended into a mature work. The rhapsodic themes interplayed between the piano and cello, and there was a delicate and enthralling Largo cello theme. The final Polonaise was crafted in rondo form and the youthful romp in heroic style brought the concert to a triumphant conclusion.