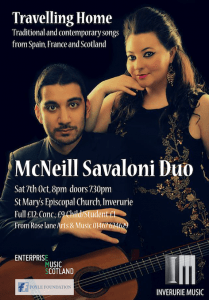 Over forty people enjoyed Inverurie Music’s first concert of the season at St Mary’s Episcopal Church last Saturday. The guitar and soprano duo, Sasha Savalone and Alison MacNeill, produced a wonderful musical treat. Alison’s voice is strong, clear and creamy, with no hint of any forced notes, just a relaxed and at times moody sound. Sasha accompanied with precision and delicacy, caressing the soprano lines at times with warm arpeggios. Spanish folk tunes by Rodrigo and Turina were well served by Alison’s timbre and her playfulness. Contemporary music by Inverness composer Stuart MacRae was both refreshing and emotionally stirring; his “The Lif of This World” with text in Middle English, and a freely modal setting was particularly stunning. The text included the lines “With weepinge we comen, With weepinge we passen” sung with eerie cadences reminiscent of Gaelic church chanting. Riveting stuff! French folk songs followed the interval and then a solo Spanish guitar piece by Sasha, both delicate and mellifluous. Before ending with a set of Scottish folk songs, the Prayer of St Columba being the standout encore, the couple played another contemporary piece “Moon” by Marco Ramelli. This evoked a woman calling to the moon……it was beautiful but sad too….. The audience was delighted, and showed it.

Inverurie Music’s next concert features jazz pianist Rossano Sportielli from New York. He has delighted audiences at the Nairn Jazz Festival and you can hear him at the Inverurie Town Hall on Tuesday November 7th .