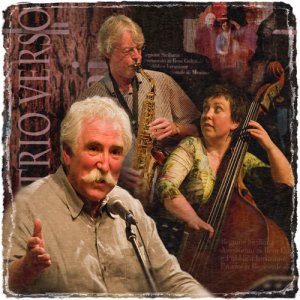 Trio Verso was founded in 2007, combining poetry from Brian Johnstone with the jazz idiom of musicians Richard Ingham (saxophone, bass clarinet and low whistle) and Louise Major (double bass and percussion). They released a CD, Stormchaser, last year. The recital was part of the New Words Festival.

As the blend of poetry and improvised music unfolded during the performance, Brian Johnstone explained the background to each poetic theme and also how some of the sound effects were made by the musicians. This was useful and interesting for the audience, for although poetry has been enhanced or enlivened by music before in film scores and documentaries as well as readings, it is usually prepared and often scored. The group demonstrated how their music was purely improvised, by turning their music stands to the audience — look no notes, just verse! 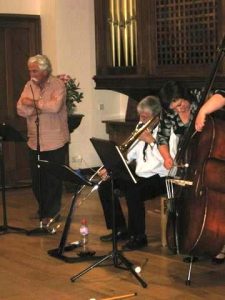 Brian’s poetry is an eclectic mix varying from landscape evocations such as How the Mire Thaws, nostalgic reflections on the Home Service to whimsical commentary on the mundane like Power Cut, which came to a suitably abrupt end. As a primary school teacher for many years, he has obviously shared and enjoyed the children’s fresh approach and fun in playing with words. His recitations included “found poems” that are based on others’ writing, such as The Method, a commentary on the rags to riches story of Marilyn Monroe based on the writings of Alistair Mackay — “Save the tears, you may need them, the doctor says.” 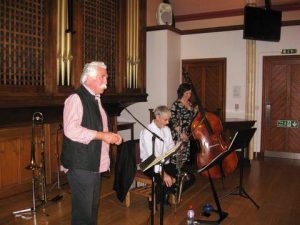 The musicians’ combination of double bass and bass clarinet produced dark primeval sonorities that contrasted well with voice and they were given an improvisation spot in each half of the concert to show off their versatile talents. As well as the idiom of jazz, their experiments exploited the sensual aspect of music making, such as the haunting low whistles in Place of Graves. Louise used soft drumsticks on the body of the double bass in Stormchaser and for much of the concert, Richard added a “trombaphone”, a clarinet reed mouthpiece, to the trombone to give the emotional senses that the group were striving for. The range of effects and their skill in conjuring up the expressions were impressive.

Brian Johnstone has published two pamphlets and two full collections; his latest book of poems is The Book of Belongings published by Arc in 2009. Richard Ingham is Composer in Residence and Fellow in New Music at the University of St Andrews and jazz tutor at St Mary’s Music School, Edinburgh. Louise Major is a double bass tutor for the University of St Andrews Music Centre and St Leonards School, St Andrews. She leads the jazz band The Major Groove.

The next Inverurie Music concert will be given at Kemnay Church Centre at 8pm on Friday 4 November, featuring the acclaimed Swedish pianist, Peter Johansson, who won a special prize for the best performance of contemporary music at the Scottish International Piano Competition in 2010.

More images from this concert