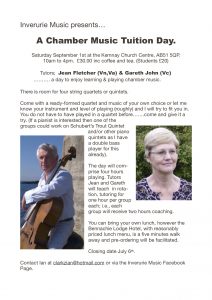 Inverurie Music is grateful to The Garioch Partnership for kindly supported this event.

Jean Fletcher comes from a highly musical family; born in Yorkshire, she studied the violin with Eta Cohen and then at the RCM in London with Hugh Bean and Frederick Grinke. She led the Heller String Quartet in Bermuda. The Hellers were the first quartet to be invited by Sir Yehudi Menuhin to go to Bermuda to set up a string teaching programme and to be involved in the musical activities on the island. Jean later became Principal number 2 violin with the Ulster Orchestra before taking up a teaching position in her home town of Doncaster. In 2006 Jean moved to Aberdeenshire in Scotland where she teaches in schools, is leader of the 2nd violins with the Aberdeen Sinfonietta and leader of the Aberdeen Chamber Orchestra. Jean was invited to be Concert Master of the Menuhin Foundation String Orchestra, playing in the Bermuda Festival in February 2016. The Heller Ensemble has been reformed in Aberdeenshire with Ruth Kalitski, Sandra Thompson, Gareth John and Blair Cargill.

Having graduated from the Guildhall School of Music & Drama with Distinction in Performance (studying with the eminent cellist, William Pleeth), Gareth studied conducting with Neeme Järvi, George Hurst and Sir Charles Grove and completed a BA (Hons) First Class with the Open University.

Gareth regularly appears in recital and as concerto soloist, has recorded for BBC Radio 3 and has two performances of the complete Bach Suites for solo cello scheduled during the summer months.  He was, until recently, principal cello with Aberdeen Sinfonietta and continues to play with the Heller Quartet.

With a commitment to working with young people – the musicians of the future – throughout his career, Gareth has worked regularly youth orchestras including the National Youth Orchestras of Scotland and in Wales.  This commitment extends to adult learners through chamber music courses and orchestral playing (Aberdeen Chamber Orchestra, etc.)