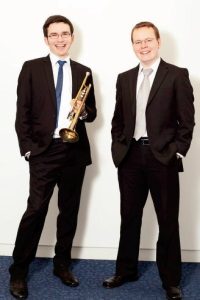 Brass Diversions is a cutting edge ensemble, designed to promote a wide range of unexplored repertoire, and is already involved in a number of collaborations and commissions. Formed in 2010, Brass Diversions a fluid ensemble, ranging from duo work right up to brass quintet and large ensemble performances, pulling from a pool of the finest brass players in Scotland. The founding trio’s three members met as students at the Royal Conservatoire of Scotland, and each is pursuing diverse careers.

Renowned for his musicality and artistry, Tom Poulson is widely regarded as one of the leading and most flexible musicians of his generation. A multi award winner, Tom recently won both the Trumpet and Contemporary Performance prizes at the Aeolus International Competition for Wind Instruments as well as second place overall. As well as being a Yamaha Music Foundation of Europe competition winner, Tom was a recommended artist of Making Music’s Philip and Dorothy Green Award and runner up at the Bromsgrove International Young Musicians’ Platform. He has performed concertos with the Düsseldorf Symphoniker, English Symphony Orchestra and Camerata Scotland and has given recitals at St Martin in the Fields and the Royal Festival, Wigmore and Usher Halls.

A graduate of the Royal Conservatoire of Scotland, where he studied with John Wallace, Tom performed Jolivet’s Concertino for Trumpet, Piano and Strings with the BBC SSO, Haydn’s Trumpet Concerto with the RSNO and Shostakovich’s Concerto for Piano, Trumpet and Stringswith the RCS Symphony Orchestra. As a soloist Tom has always sought to champion new music and has performed numerous premieres including Oliver Searle’s Glasgow Sequenza, which received a 5 star review from The Herald newspaper.

Tom regularly works with Scotland’s national orchestras as well as the Mahler Chamber, Aalborg Symphony and Aarhus Symphony Orchestras. He has been a member of the Lucerne Festival Academy, performing under the baton of Pierre Boulez, and worked as an onstage musician with the Royal Shakespeare Company. Chamber music has always been a passion of Tom’s and aside from founding Brass Diversions he regularly works with the Red Note Ensemble, Aarhus Sinfonietta and the renowned World Brass.

Tom is very grateful for the ongoing support he has received from the John Hosier Trust, Martin’s Musical/Philharmonia Orchestra Scholarship Fund, Anglo-Danish Society, Craxton Memorial Trust and he holds a silver medal from the Worshipful Company of Musicians.

“The Sequenzas were amazing. I couldn’t get the smile off my face during Oliver Searle’s trumpet Sequenza, which seemed to me enormously witty, conjuring an image of an overweight hornet buzzing grumpily as it repeatedly attempted take-off, somewhat hindered by a hefty derriere which remained firmly earthbound. Tom Poulson’s performance was staggering.” (Michael Tumelty, The Herald)

Originally from Aberdeen, Christopher Baxter began his studies there with Robert Howie at the Aberdeen City Music School. Christopher continued his studies at the Royal Conservatoire of Scotland, completing his BMus (with 1st Class Honours) and MMus (Distinction), where he was tutored by Aaron Shorr, Graeme McNaught and Fali Pavri, as well as receiving regular coaching from the renowned pianist Nigel Clayton. In addition to success in almost every competition and regular concert appearances within the RCS, Christopher participated in masterclasses with Roy Howat, Murray McLachlan, Malcolm Martineau, Roger Vignoles, Julius Drake and Martin Katz.

As well as frequent appearances as soloist, Christopher is in constant demand as an accompanist and chamber musician, and recent performances include recitals throughout the UK, including the Wigmore, Royal Festival and Usher Halls, performances at the Latour and Uzerche Festivals in France, the Alba Festival of Music in Italy, a tour of the Faroe Islands, a solo recital at the Erin Arts Centre on the Isle of Manand, and recitals in South Korea and Singapore. 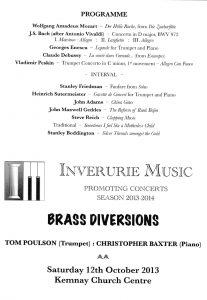