Brass Spectrum was formed in 2004 in order to innovate the modern day brass quintet by providing an individual approach to performing. Their aim is to captivate their audience with a unique and dynamic performance through playing new compositions and arrangements combined with the classic brass quintet repertoire.

Brass Spectrum are fully dedicated to education work. They are currently on the prestigious Live Music Now! Scheme and have given influential master classes and workshops throughout Great Britain and Northern Ireland.

The group have performed at numerous festivals and venues such as the Edinburgh Fringe Festival, Aberdeen International Youth Festival, Angel Canal Festival, London Symphony Orchestra Discovery Series, Wigmore Hall (London), Elmwood Hall (Belfast), Central Hall (Edinburgh), Music Hall and Cowdary Hall (Aberdeen) and the Concert Hall of the University of Music and Performing Arts, Munich. They have also been awarded a radio production with Bayerischer Rundfunk and have performed a concerto with the Baden Wuttenburg Wind Ensemble.

Brass Spectrum were quintet in residence at the Guildhall School of Music and Drama from 2006-2007, where they performed a number of concerts. They also provided a recital to mark the opening of the Guildhall Ensembles Festival.

A serious, dedicated and talented ensemble well versed in many styles of music. I thoroughly recommend that you hear them. They have a fine natural sound and although individually talented they come together as a whole that is even more impressive than the parts. (Eric Crees, Principal Trombone, Royal Opera House, Covent Garden) 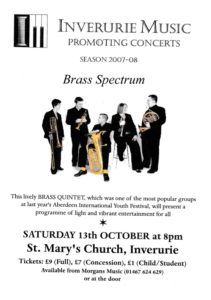 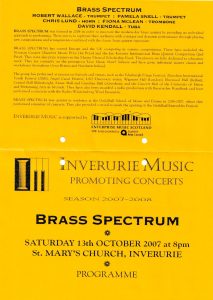 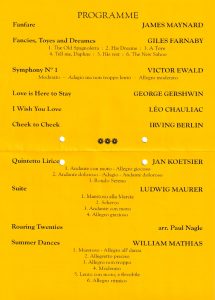