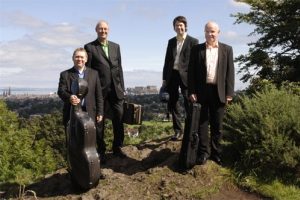 The Edinburgh Quartet was founded in 1959 and quickly became established as one of Britain’s foremost chamber ensembles, appearing regularly at prestigious venues across the country including London’s Wigmore Hall and the South Bank Centre. It achieved international recognition after winning the Contemporary Prize at the Evian-les-Bains String Quartet Competition and has since toured extensively across Europe, the Far East, North and South America and the Middle East. The Quartet has made numerous BBC TV and BBC Radio 3 broadcasts and can also be heard on Classic FM. 2009 marks the Quartet’s fiftieth anniversary and it is now one of the longest running chamber ensembles in the UK with a busier performing schedule than ever before.

The Quartet is resident at Glasgow University and Napier University and also collaborates with Aberdeen and Edinburgh Universities. In addition to a regular classical concert series at each of these institutions, the Quartet is committed to nurturing talent and championing new music. The ensemble has worked with many important and prolific composers of our age, including the Quartet’s patron James MacMillan and Michael Tippett, who selected the Edinburgh Quartet’s recording of his First Quartet for re-release on EMI shortly before his death.

This recording is representative of the Edinburgh Quartet’s extensive discography available on various labels such as Delphian, Linn, Meridian and RCA. Recent recordings include the complete Hans Gal String Quartets (‘Editor’s Choice’ Gramophone Magazine, 2007), the complete Kenneth Leighton String Quartets (‘The unanimity of their ensemble, even at the densest polyphonic moments in flying scherzo tempo, is very impressive.’ BBC Music Magazine), as well as discs of Bartok, Robert Crawford, Haydn, Schubert and Thomas Wilson. Future releases include the complete Matyas Seiber Quartets on Delphian Records, which were featured on a live broadcast by the Edinburgh Quartet on BBC Radio 3. 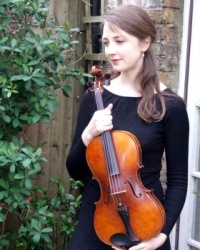 Jessica Beeston received a first class Masters degree from the Mozarteum, Salzburg where she studied viola with Thomas Riebl. Previously she studied with David Takeno and Krysia Osostowicz at the Guildhall School of Music and Drama. Jessica has been supported in her studies by the Countess of Munster Trust, the Sir James Caird Travelling Scholarship, the Cross Trust, the Martin Musical Scholarship Fund, and the Waddell Memorial Prize for Strings.

Jessica is a guest principal viola of the Scottish Chamber Orchestra and regularly plays with Camerata Salzburg, the London Chamber Orchestra, and has also played with the London Mozart Players, LSO, RLPO, BBC SSO and BBC NOW. She performed in the Wigmore Hall with Ensemble Na Mara and has recently become a member of the Nephele Ensemble. She has participated in the Prussia Cove master classes and the Mendelssohn on Mull chamber music festival.

This year Jessica was a soloist in the ROSL strings competition. As a member of Live Music Now with pianist Andrew Johnston she has performed in venues throughout the country. Jessica has been described as being “a commanding presence in total control of the music” (Butterworth, Paxton, July 2008) and “a stunning viola player” (Michael Tumelty, The Herald, Feb 2008).