Hoot made their debut performance at the Edinburgh Festival 2006 with Mozart’s Concerto for Flute and Harp.

Their 2008 Homecoming Tour of the North of Scotland was a huge success and as the recent winners of the prestigious Tunnell Trust Award for Young Musicians 2009/2010, they will commence their second Scottish tour including recitals in Orkney, Inverurie and Milngavie. In May 2009 Hoot were invited to attend the Blair Atholl Showcase for Young Musicians where they worked with many distinguished musicians including William Bennett and Neil Black. 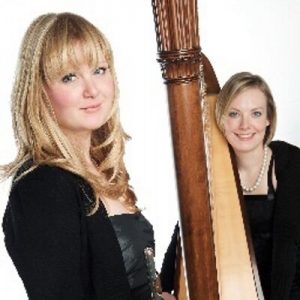 Hoot are the current recipients of the 2008-10 Enterprise Music Scotland Residency Project, an in-depth development programme for emerging Scottish-based chamber groups. In October 2008 they made their first appearance under EMS in Glasgow’s Oran Mor as part of the a Concert, a Cocktail and a Canapé series. As part of this project, Hoot will be premiering a new work for flute and harp by one of Scotland’s finest composers, Helen Grime, and they have just recorded their first album, The Garden of Adonis which will be launched in April 2010 at the Edinburgh International Harp Festival.

Education and music therapy play a very important role to Hoot and since November 2007, Emma and Helen have been part of the Live Music Now! scheme, a project set up by Yehudi Menuhin to bring the joy and inspiration of live music to those who have limited access.

As versatile musicians, both are very much in demand as orchestral and chamber musicians and their accomplishments include performances with all of Scotland’s professional orchestras, the Hallé, the Northern Sinfonia and the pop groups Belle & Sebastian and Texas.

The combination of their eclectic repertoire and their passion and flair, guarantee audiences a truly thrilling and inspiring performance.