Ferries exploits the instrument’s capacity for timbre and expression with inspired and impeccable technique.
Goldberg, February 2006

Ferries achieves an astonishing array of moods and emotions… at once crisp, stylish, and fun.
Early Music America, Spring 2006

Stylish and accessible baroque from an exponent whose star is in the ascendant.
Classical Guitar, March 2004

Having initially studied classical guitar at Napier University, Gordon Ferries went on to study at the RSAMD where he specialised in lute and early guitar music. He has now established himself as one of the UK’s leading exponents of the baroque guitar. Gordon has worked for both television and radio: arranging and performing music for the Radio 4 production of The Dreamer of the Calle de San Salvador, featuring on Scotland’s Music with Concerto Caledonia and for BBC 2 television.

He has performed in venues and festivals across the UK and Europe both as a soloist and in ensemble, appearing with the Scottish Ensemble, the Scottish Early Music Consort, the Edinburgh Quartet, Symphonie de plaisirs, and Fires of Love, with which he has recorded two CDs, and his new baroque ensemble Lord Rochester’s Monkey with Frances Cooper, John Kitchen and Mark Summers had its first performance at the 2010 Edinburgh Fringe.

Gordon has been awarded two grants from the Scottish Arts Council towards study at the Bibliotheque Nationale de Paris, researching the baroque guitar; the fruits of which appear on his much lauded solo recordings. Gordon is also much in demand as an educator and is involved in teaching young people in many musical styles. 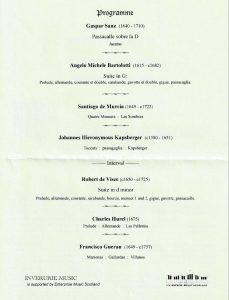