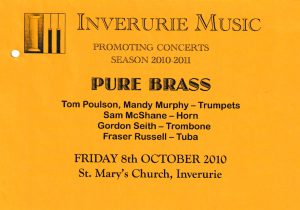 Award winning Pure Brass is a vibrant, young and well established brass quintet, which performs regularly to critical acclaim. Formed in 2006 at the Royal Scottish Academy of Music and Drama, the group has quickly become a prominent ensemble within the Scottish chamber music scene. Pure Brass is part of the Live Music Now scheme and Enterprise Music Scotland residency project, which will lead towards a commission and concert tour across Scotland. Success in competitions has seen Pure Brass win the RSAMD Governor’s Chamber Music Prize, leading to a concert performance which was subsequently made into a recording for BBC Radio Scotland, the Mary D. Adams Prize for chamber music and the Norman Cooper Chamber Music Competition. This year the group also made it into the final of the prestigious Royal Overseas League Competition. Individually the members of Pure Brass can be seen regularly playing with the BBC Scottish Symphony, Royal Scottish National and Scottish Opera Orchestras. Regularly seen performing across the UK, Pure Brass has given recitals at leading festivals including the Edinburgh Fringe, Durham Festival of Brass and Aberdeen International Youth Festival. Pure Brass has a strong belief in the music of its generation and recently performed a sold out concert of contemporary music in the Royal Scottish Academy of Music and Drama accompanied by mixed media. They have premiered a variety of new works by young upcoming composers including Polish Dances by composer Marek Pasieczny, which was performed at the Sounds New contemporary music festival in Canterbury. Education is also central to the group’s work and Pure Brass regularly performs workshops and interactive concerts in self-governed classes and under the auspices of Live Music Now.

This quintet is beyond doubt the most thoughtful brass group to have emerged from the academy in recent years. Their concerts are an education, with informed but informal introductions to each piece, and they have a fascinatingly eclectic repertoire, including fine original arrangements by trumpeter Tom Poulson. Seith and his cohorts are certainly ones to watch. 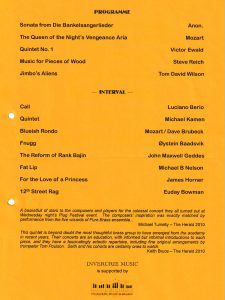