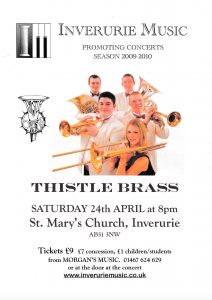 Thistle Brass is fast making a name for itself as one of the UK’s most exciting and innovative young chamber ensembles. The group has performed in a highly diverse range of settings and contexts, from the Orkney Islands to the Great Wall of China, from major music festivals and concert clubs to state and civic occasions.

Thistle Brass was established in 2002 by senior students at the Royal Scottish Academy of Music and Drama, where it has won several prizes and awards, including the Mary D Adams Prize for Chamber Music. They have also been recognized by two major national awards, the Tunnel Trust Award for Chamber Music and the Musicians Benevolent Fund Award for Ensembles.

The group has toured throughout the United Kingdom and further afield, including China in 2004. It has performed at several major festivals including the Birmingham Brass Explosion, RSAMD Brass Spectacular, Moray Spirit of Brass Festival, Edinburgh Fringe Festival, appeared as Ensemble in Residence at the St Magnus Festival, Orkney and has given several broadcasts on BBC radio.

Thistle Brass has built a reputation for concerts presented in its own inimitable and entertaining style. The group has an expansive and diverse repertoire, and is equally at home performing classical to jazz, from serious to lunatic, whether performing new commissions from composers of today, or loosening its ties in a selection of its distinctive lighter repertoire.

Education and outreach work plays a very important role in the work of the quintet. It has organised many educational activities of its own, and has worked regularly for several education authorities throughout the UK,well as performing under the prestigious Live Music Now! Scheme.

Thistle Brass has also performed on several occasions for prestigious royal and civic occasions, including performances in the Scottish Parliament for the First Minister, in China for the British Embassy, and performing for world leaders and media at the historic G8 Summit held at Gleneagles in 2005.

The group was appointed Ensemble in Association at the Royal Scottish Academy of Music and Drama at the start of 2009, and in this role they will perform concerts, provide coaching and take part in various education outreach projects. 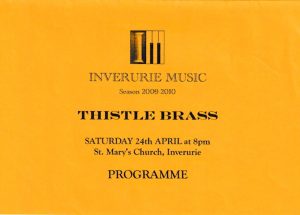 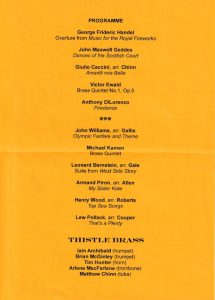