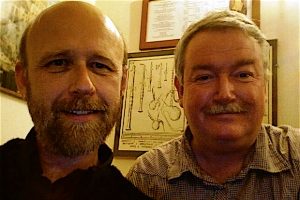 Historical and traditional music associated with the Ossianic poems of James Macpherson, the songs of Robert Burns and the sonnets of William Shakespeare, performed by

James Ross and Bill Taylor formed The Art of Musick in 1998 to explore Scottish vocal and instrumental music before 1800, using voice, historical harps, recorders, whistles and small pipes. Both specialists in Medieval and Renaissance Scottish music, they take their ensemble name from a late 16th-century manuscript of music compiled during the reign of James VI, “collectit out of all ancient doctouris of music”.

James Ross is founder/director of the early instrument consort Coronach, which specialises in performances of the instrumental music of Renaissance Scotland and Europe. He also directs the early music choir Musick Fyne, who perform choral music from the Renaissance. As director of The Carver Choir of Aberdeen in the early 1980s, Mr Ross had pioneered performances of music by the Renaissance Scottish master Robert Carver, directing a number of first performances in modern times in a memorable series of liturgical reconstructions, and this tradition continues with Musick Fyne’s Carver reconstructions.

As an actor he appeared for many years with the Clifton Players in Nairn and has directed his own drama ensemble, The King’s Players, who specialise in Scottish Renaissance Drama performed in authentic costume and in Renaissance Scots with music by Coronach. They presented acclaimed performances of Ane Satyre of the Thrie Estaitis and Tapestry of Words and Music from the life of Mary, Queen of Scots. More recently with Coronach, Musick Fyne, the Florians and Danse Ecosse he researched and staged The Entry of the Gods, a masque for the marriage of Mary, Queen of Scots and Lord Darnley.

As a musicologist he has researched music in Renaissance Scotland and has written the standard reference text on the topic, Musick Fyne: Robert Carver and the Art of Music in Renaissance Scotland and has also published several scholarly articles and broadcast on radio and TV on related topics as well as contributing to the Dictionary of National Biography. Since 2008 he brought out two collections of poetry entitled Life & Death & Stuff and Orkney Strata & Mosaics.

As a music editor he has produced performance editions of music from Renaissance Scotland published online by Scotchsnap. He also reviews early music recordings and music publications for the London-based magazine Early Music Review, and for Early Music Forum of Scotland News. He plays clarinet in a semi-professional capacity, both as a solo artist and orchestrally in the Inverness Sinfonia and Highland Chamber Orchestra. He was a director of Balnain House, served on the committee of the Nairn Performing Arts Guild and is an active member of the arts community in and around Inverness.

Bill Taylor is a specialist in the performance of ancient harp music from Ireland, Scotland and Wales, and is one of very few players investigating these repertoires on medieval gut-strung harps, wire-strung clarsachs and harps with buzzing bray pins. He is currently a teacher-in-residence for Ardival Harps in Strathpeffer. He also teaches community music classes in the Scottish Highlands through Fèis Rois and is a guest lecturer at the Royal Scottish Academy of Music and Drama in Glasgow. As a teacher of historical harps, he is frequently invited to lead workshops in the UK, Europe and the US on a variety of subjects, such as arranging for small harps, using fingernail technique with wire-strung harps and playing music from medieval, renaissance and traditional sources. He is a contributor to the New Grove Dictionary of Music and publishes articles relating to aspects of playing the wire-strung clarsach and music from the Robert ap Huw manuscript. For many years he has been on the Executive Council of the Clarsach Society; he also founded the Wire Branch of the and is its Convener.

Bill performs and records as a soloist and as a member of several groups. Aside from playing in the duo The Art of Musick, he also performs with the Highland instrumental and vocal ensembles Coronach and Musick Fyne. He has worked closely with singers in Cappella Nova and Canty, accompanying them in performances of medieval plainsong associated with Celtic saints and music by Hildegard of Bingen. In Belgium, he performs with recorder player Geert Van Gele and also with their late-medieval quartet Quadrivium. Additionally, he has joined ensemble Graindelavoix for projects involving late-15th and early-16th century Burgundian composers. Venturing into the field of musical archaeology, he brings ancient Sumerian music to life in costumed performances using an authentic reconstruction of the golden bull-headed Lyre of Ur.

Numerous radio and television broadcasts have featured his work with ancient Irish, Scottish and Welsh harp traditions, including a recent BBC4 TV programme on the history of the harp. He has recorded for ASV, CMF, Divine Art, Dorian, Gaudeamus, Greentrax, Maggie’s Music, Rhiannon, Rota and Temple. 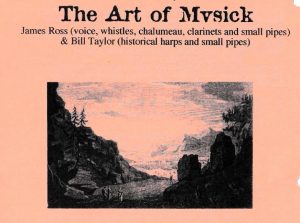 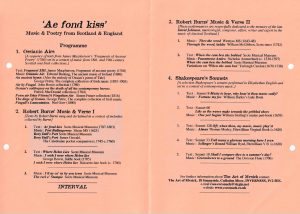