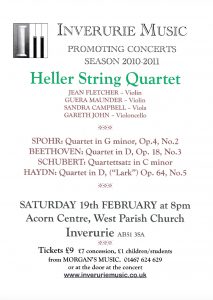 A new chamber ensemble for Aberdeenshire

The Heller String Quartet was formed in 1976 when four musicians at the Royal College of Music in London who won several major prizes for individual performance and quartet playing were invited by the Yehudi Menuhin Foundation to become the quartet-in-residence in Bermuda. They took their name after winning the Gerard Heller Quartet Competition. After several years, they disbanded and left Bermuda. One of the original members was Philip Burrin of the Edinburgh Quartet. Jean Fletcher was the first violinist, who won the Tagore Gold Medal in her final year at the RCM. She brought a new set of players together in 2007 to form the new quartet, and has expanded it as the Heller Ensemble, to include piano, clarinet and other instruments so that a wider repertoire of works can be presented.

Jean comes from a highly musical family; born in Yorkshire, she studied at the RCM in London with Hugh Bean and Frederick Grinke. After leading the Heller Quartet in Bermuda, she was principal violinist of the Ulster Orchestra for several years. Soon after moving to Scotland, she became leader of the Aberdeen Chamber Orchestra, and principal 2nd violin of the Aberdeen Sinfonietta. She is also an outstanding viola player.

Guera was born in Aberdeen, joined the National Youth Orchestra of Scotland when she was 12, and at 17, she went to the Royal Academy of Music in London. After graduating she started her professional career with the Orquesta Sinfonica de Sevilla. Following performing in the Ulster Orchestra and Scottish Opera, she returned to Aberdeen to teach at the Aberdeen City Music School.

Sandra went to St Mary’s School in Edinburgh and then studied at the Royal Academy of Music in London with John White. She began playing with the Philharmonia, spent three years performing in Germany, and then returned to Scotland, playing with the BBC Scottish Symphony Orchestra. She now plays with the Aberdeen Sinfonietta.

Gareth was taught first by his father, a well known cellist at the University of Wales Aberystwyth, and then George Isaacs. He graduated from the Guildhall School of Music in London, where he had studied with William Pleeth and was awarded several major prizes. He leads the cellos in the Aberdeen Sinfonietta, conducts several orchestras, including the Aberdeen Chamber Orchestra, plays in a number of chamber groups, and works with the National Youth String Orchestra of Scotland. 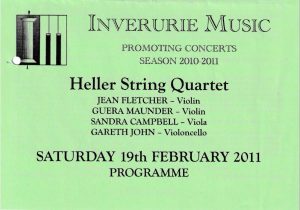 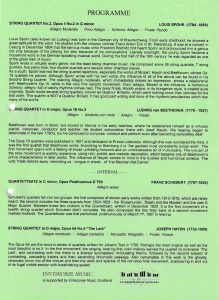