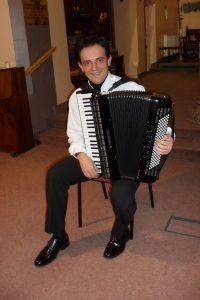 What kind of music does the accordion conjure up for you? Is it the glittering decorative melodies of the Parisian street busker? Is it the traditional Scottish dance music of the “Reel blend”? Is it a sing-along at a Burns Night or a New Year party? But is it Bach and Mozart — really? In a recital on Saturday in Inverurie’s St Mary’s Episcopal Church, Djordje Gajic demonstrated to a captivated audience that the accordion was indeed an instrument that was entirely capable of interpreting the great masters and a solo instrument with its own repertoire.

Djordje Gajic was born in Serbia but has lived in Scotland for thirteen years and lives in Glasgow, married with two children. He met his Australian wife, who was born in Glasgow, while he was studying in Russia. He teaches at the Royal Conservatoire and also at St Mary’s Music School in Edinburgh as Professor of Accordion. He introduced each musical item to the audience, sometimes with a little story about the composer.

The programme began with a flourish with a transcription of the famous organ work by J. S. Bach, Toccata and Fugue in D minor. “Toccata” means a “touch piece”, pieces designed to show off the brilliance of both instrument and performer. Djordje did not disappoint us; Bach himself would have approved. The four Scarlatti transcriptions that followed contrasted well. We were shown how delicately the accordion could portray these sonatas and the musicality of the performer with his caressed almost lute-like phrasing. Before the interval we were given a taste of what was to come with Sonata No.2 by the Russian composer Zolotaryov. As Djordje explained, this composition was ground-breaking, for the accordion was completely re-examined by the composer who stripped it down to the fundamental and unique sounds that it could produce.

After the interval, we were led on a tour, starting in Europe in Vienna with Mozart and travelling through the Balkans to Russia. The exciting music of the Bulgarian Suite by Semyonov featured abrupt changes of key in ancient “Turkish-style” modes. Yuri Dranga, Djordje’s post-graduate teacher, composed the next piece, the evocative Fantasy, capturing the lonely calm of a Russian coastal landscape, where the call and the curved flight of the seagull were the only companions.

Finally the programme was concluded with two pioneers of ethnic music, Albeniz and Villa-Lobos. The piano music of Albeniz lends itself to transcription, particularly guitar. In his “Iberia”, made up of vivid impressions of his native landscape, the accordion was more than equal to the task both technically and expressively with left hand melodies accompanied lightly with right hand guitar-like arpeggios. “The Dance of the White Indian” was another fine contrast — a romp in the streets of Brazil.

During the concert and afterwards, Djordje thanked Inverurie Music and the Church of St Mary’s for their warmth and hospitality and answered many technical questions about the accordion as a musical instrument. This is IM’s last concert of the season. Keep in touch at the website: www.inveruriemusic.org.