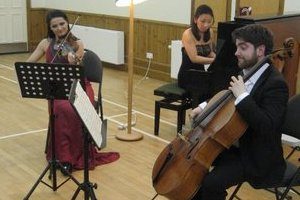 If proof is needed for the lasting value of live music in today’s cybernetic world, it can be found with musicians like the Greenwich Trio. Saturday’s performance at the Kemnay Church Centre was superbly compelling. Each artist was absorbed in the whole work, not just his or her own part in it. A genuinely thankful audience rose to its feet. As one of them remarked, “It is us that should be bowing to them, not the other way round.”

The Greenwich trio, so-called because they met in London, is supported by the Tunnell Trust for talented young musicians. Lana Trotovšek (violin) hales from Slovenia (part of former Yugoslavia) and studied in Salzburg and London. She has already received the highest award that can be granted by a Slovenian university. Duncan Strachan (cello) attended Lochaber High School and St Mary’s Music School, Edinburgh, before going to Oxford and the Royal Scottish Conservatoire in Glasgow, where he gained a Master of Music degree in 2011. Yoko Misumi (piano) was born in Kyoto in Japan, winning a piano competition there at the age of fourteen. On completion of her studies at Kyoto, she studied in London, where she gained first prize in the John Longmire Beethoven Piano Competition.

The Piano Trio No.5 in G major by Mozart is a mature work, yet the bright texture is only occasionally interrupted by more sober interludes. The trio showed their appreciation with a gentle touch in the interplay of the themes, particularly in the movements in Theme and Variation and Rondo form.

The Trio élégiaque no 1 in G minor by Rachmaninov was a well-chosen contrast to the frivolities of the preceding piece. Although the work was composed when he was only 19 in 1892, it is unmistakeably Rachmaninov. The movement is constructed in a classical arch but the melodies are rhapsodic. In the opening, the piano takes a prominent role as befits the modern instrument, striking the theme in bell-like octaves above the surging waves of the strings. The performers’ immense powers of lyrical beauty reverberated in the generous acoustic, while scales and arpeggio passages were delivered with a precision that made them sound effortless.

Like the previous composers, Mendelssohn was a child prodigy, but though life was kinder to him than to Mozart, he also died prematurely at the age of 38. By the time he was twelve, the young Felix had written a piano trio, several symphonies for strings, a wedding cantata and many smaller pieces. The Piano Trio in C minor Op.66 No.2 was to be the last piece of chamber music that he saw published. This mature and stately work reveals what might have been.

In homage to J. S. Bach, whom Mendelssohn admired greatly, the piece opened with organ-like scales and arpeggios over a pedal point from the cello, but the sepulchral mood was soon dispelled with episodes in romantic yet economic style. The second movement was a lilting “song without words”, while the third was another Mendelssohn speciality, a glittering tour of fingerboards and keyboard in perpetual motion. In the finale, contrasting ideas are weaved through a recurring Bach chorale theme in C minor. Here the trio revealed vast reserves of power as the chorale was overlaid by the first episode in the major key, bringing the work to a radiant conclusion.

The next recital will be given by Djordje Gajic (classical accordion) on Saturday, 21st April in St Mary’s Episcopal Church, Inverurie at 8pm. 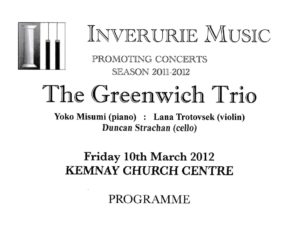 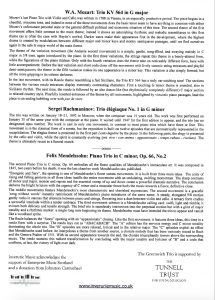 More images from this concert