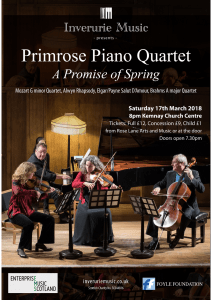 On Saturday, 17th March at the Kemnay Church Centre, an attentive and appreciative audience that included two young piano students braved the cold weather to listen to the Primrose Piano Quartet. As well as two full-scale works by Mozart and Brahms, two romantic English composers, Elgar and Alwyn, provided an interesting contrast in period colour. The Quartet was founded by pianist John Thwaites and was named after the great Scottish pianist, William Primrose.

The Primroses began the concert with Mozart’s Piano Quartet in G minor, a key that was favoured for its dramatic pungency by many composers. The first movement began with a powerful theme that was hammered out in the generous acoustics of the hall. Its sinister intent in unison gave way to a more graceful musical conversation, where the piano and violin dominated the texture.

A piano solo introduced the aria-like slow movement, while the final two movements displayed Mozart as the virtuoso pianist of his day. In the 18th Century, the piano did not have the compass or dynamics of the modern instrument. A technique that was used to sustain the harmony was the Alberti Bass that quietly plays arpeggios in the left hand. John Thwaites demonstrated his musicality in allowing the melodies and string parts to shine through the texture.

We can be forgiven for thinking that there is something familiar about the music of William Alwyn, as his film scores are in abundance from the 1930’s onwards. These include the History of Mr Polly and The Crimson Pirate. He was recognised initially as a virtuoso flautist until he was in his twenties and became a Professor of Composition at the Royal Academy of Music. His colourful Rhapsody for Piano Quartet of 1938 showed that late romanticism did not mean brooding sentimentality.

Two pieces by Elgar, Mina and Salut d’Amour did provide some romantic interest, although the first of these was written by Elgar on his deathbed in honour of his dog!

Unlike many romantic composers, Brahms delayed composing of large-scale works until his later life. Although it is a comparatively early work, The Piano Quartet in A major demonstrates how fortunate we are that he concentrated on chamber music. In this tribute to Schubert, the pulsating tide of the waving melody in the First Movement between happiness and sadness may be a reminder of the bitter/sweet quality in his music. The piano is now a much larger instrument, that can penetrate beyond the salon and Brahms pitches it independently against the strings and vice-versa.

The Primroses dug in to release the full intensity of this wrestling match. In the slow movement, theme and imitative responses between violin and viola were breathtakingly moving. Equally masterful in the third movement was the half-beat syncopation that managed to cope with the sway caused by relaxing of tempo. Finally, a frolicsome blend of melody and gypsy dance concluded the concert with a leap of joy. Enthusiastic rounds of applause from a delighted audience showed their appreciation for an intelligently-interpreted and truly polished performance.