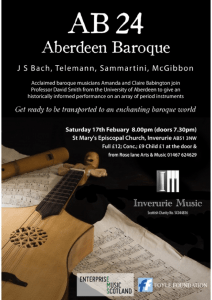 BAROQUE ENSEMBLE GETS A FULL HOUSE AT ST MARY’S

In a recreation of the spirit of music from Eighteenth Century Europe, AB24 or the Aberdeen Baroque Ensemble, performed in front of a capacity audience at St Mary’s Episcopal Church on Saturday. AB24 are made up of sisters Amanda and Claire Babington and David Smith, Professor of Music, Aberdeen University.

There is a problem with performances of this era. How do we know what the composer intended when the performance is with modern instruments? Sometimes we get a lucky break, such as the collection of music from Castle Fraser, where some of the instruments that were used are still intact. Otherwise it takes much detective work and craftsmanship to reproduce the original sounds. Each of the musicians in AB24 expertly guided the audience through their array of modern copies of 18th Century instruments.

This began with David and Amanda expertly playing a sonata for two recorders by Sammartini. The tone of the recorder is more mellow and sweet than the modern transverse flute. David then talked about the different types of harpsichord and explained its differences from the piano. David followed up this description with a fine performance of the Preludio and Capricio by Mauperge.

In an ensemble, the harpsichordist was only expected to “fill in” the harmony for solo instruments and voices as a continuo with a bass note and figure. This figure was a code for the chord to use, so there could be more than one version of the same piece, as the harpsichordist extemporised on the figured bass.

Amanda spoke about her baroque violin, its gut strings and its bow, which was shaped differently from a modern one. This was ably demonstrated by the ensemble with an enjoyable piece by Scottish composer, William McGibbon. At the time, Scotland was enjoying a cultural revival, especially in Edinburgh.

Straddling the interval were two pieces by J.S. Bach: a transcription of an Organ Sonata in F major and a solo Cello Suite no 2 in D minor. The transcription for recorders and cello gave the piece a transparency that enhanced the contrapuntal texture beautifully.

The cello suite was handled with aplomb; its technical difficulties were washed away by Claire’s awareness of the inner pulse of the harmonically complex movements, such as the noble and intense Sarabande. She also showed a lightness of pace with the faster dances.

A contemporary of Bach’s was George Philip Telemann. The Sonata for two flutes with its perpetual imitations and lively gigue was expertly played and showed that Telemann deserves more recognition.

At the end of the concert Amanda introduced us to the musette, French bagpipes, similar in tone to the Northumbrian pipes. The instrument was popular in Louis XIV’s court, where idealised versions of country life were the vogue. She played the Premierre Sonate in C by Senaillé expertly. The audience was both intrigued and delighted with this novelty.

Finally the ensemble played a Sonata by Jean Féry Rebel. This was a composer that challenged the predominance of the Italian style. It was regarded as being very modern for its day.

At the end of their well devised programme, AB24 received warm applause for their very fine musicianship and interesting talks. Many in the audience gathered to take a closer look at the instruments and the musicians answered their questions. Inverurie Music certainly hope that they will return to Inverurie again.