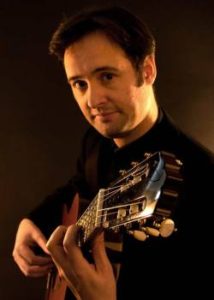 Cochin, Colombo, Phuket, Singapore, Kemnay. Such is the itinerary of the modern jet-setting international soloist. Fresh from his Asian tour at the beginning of February, classical guitarist Ben Kearsley brought a well-planned and varied programme to the Kemnay Church Centre on Friday night.

He began with a set of three very well-known pieces — an anonymous Spanish Romance, Albeniz’s Asturias and Stanley Myers’ Cavatina from The Deer Hunter — tackled with such dazzling virtuosity that they seemed not at all hackneyed. From this familiar starting point, he took us on a whirlwind tour of the world of the guitar repertoire. A set of sixteenth-century Spanish pavans by Luis de Milan came next, with Kearsley using the device guitarists call a capo to approximate the tuning of the vihuela.

The first half concluded with a set of modern pieces mostly from South America — a Brazilian evocation of bells and an Argentine tango, a quick leap across the Atlantic for a touching and unassuming piece by Catalan composer Miguel Llobet characterised by seemingly effortless use of harmonics, then a return across the water for a pair of witty pieces by the eccentric Paraguayan guitarist-composer Agustin Barrios. The second of these, London Carape, evoked the sound of traditional harp music, varying the tone colour of the guitar using thumb pizzicato and ponticello techniques.

We began the second half in classical mode with the Grand Overture by Mauro Giuliani, a guitar-playing contemporary of Beethoven, then two songs by Schubert, who played the guitar but didn’t write much for it. These transcriptions worked well on the guitar — the dark and mysterious Organ Grinder contrasting with the babbling Trout.

Ben Kearsley next brought a pair of Bolivian folk pieces, full of foot stamping and lively syncopation — he spent a year teaching and performing in Bolivia — and after these a pair of Beatles tunes that seemed restrained and reflective in comparison.

The final set was the most varied, including a French tango celebrating artificial leather, and another return to Paraguay for a work by Barrios in which Kearsley managed to sustain a continuous tremolo and play melody and bass lines at the same time andmake it all sound easy. Then there was another Argentine tango, another gentle Catalan air, and to finish a piece by Andrew York called Sunburst, which was more complex than its title might suggest and once again left us wondering how did he do that?

For an encore Ben Kearsley brought us home to Scotland with his version of Shieling in the Braes of Rannoch.

This fabulous concert, a joint promotion by Inverurie Music and the North East Scotland Classical Guitar Society, kept its listeners spellbound, and several audience members commented at the end on how lucky we are to be able to experience live music-making of such quality on our doorstep. Inverurie Music’s next concert brings the Greenwich Piano Trio to Kemnay on 10th March, whilst the Guitar Society features Ian Watt in Rodrigo’s Concierto de Aranjuez in Aberdeen on 27th May. Make sure you don’t miss them!

Meanwhile we wish Ben Kearsley well as his concert tour takes him to the Caribbean later this month and the islands of the South Pacific next month, with an appearance in Glasgow squeezed in between.