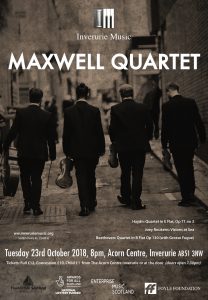 First Prizewinner and Audience Prizewinner at the 9th Trondheim International Chamber Music Competition in 2017, where their performances were hailed as “superb storytelling by four great communicators” by The Strad Magazine, the Maxwell Quartet is now firmly regarded as one of Britain’s finest young string quartets,  with a strong connection to their folk music heritage. Formed in 2010 at the Royal Conservatoire of Scotland, the quartet studied with The Endellion Quartet through the King’s Place Chamber Studio Programme, and Hatto Beyerle, founding member of the Alban Berg Quartet. The quartet performs regularly across the UK and abroad with upcoming concert engagements across Europe including Denmark, Norway, Germany, the Netherlands, France, as well as concert tours in China and the United States. The Quartet’s debut CD is due for release in early 2019 on Linn Records.