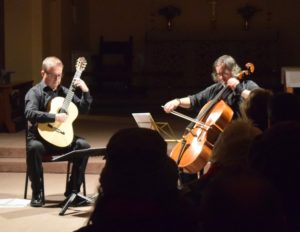 On Saturday evening at St Mary’s, Inverurie Music’s 20th anniversary season began with a warmly received recital from Allan Neave (guitar) and Robert Irvine (cello). The programme suited the generous acoustics of the church and there was a mix of styles to suit different musical tastes. 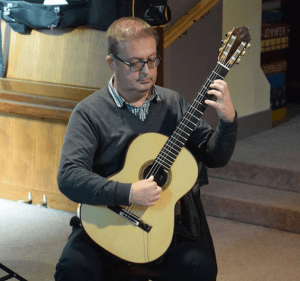 During his 30 years career, Allan was Artistic Director of the Dundee International Guitar Festival and has been a regular guest at many festivals, including Tartan Week, New York in 2012. His recordings are diverse, including the famous ‘Concierto de Aranjeuz’ by Rodrigo and a soundtrack for a film about the late Scottish artist, John Bellany. He is a Professor of Guitar and Harp at the Royal Conservatoire. 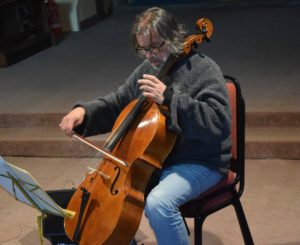 Robert Irvine is a Glaswegian and played with many orchestras in England, Scotland and Italy. In 1990, he formed a chamber group with Sally Beamish and James Macmillan and is a member of the Da Vinci Piano Trio. He is Senior Professor of Cello and Chamber Music and Head of Cello Studies at the Conservatoire.

The performers took turns to introduce the pieces in a relaxed way and some off-the-cuff humour stoked up a rapport with the audience. They warmed up with Vivaldi’s Sonata in E Minor but a “health warning” was issued for the Seven Short Pieces by Domeniconi. We were now in a cold atonal climate, where conditions were challenging for performers and audience alike. Like the 20th century composer Webern, these pieces were sparse but expressive and like icebergs, much of their weight might be hidden on a first listening.

The thermostat was turned up for the next group of deservedly popular pieces by Barrios: La Catedral, El Ultimo Tremolo and Vals Op 89. Of Indian ancestry, Augustin Barrios has been described as a proto-hippy but outward appearances often deceive. He was a master of several languages, a poet and philosopher as well as being a pioneer of the modern guitar revival. Allan described the pieces and their structure and lovingly played the set with perfect clarity and expression.

John Hearne is a founder member of Inverurie Music and a notable composer. As a special tribute, Allan and Robert played his composition for guitar and cello, “The Lover’s Pledge”, which was warmly applauded by the audience. This was followed by a Valse by Tchaikovsky and “Song of the Birds” by Pablo Cassals.

The second half opened with an iconic masterpiece for cello by JS Bach- the first of the six cello suites. Robert’s interpretation was assured and penetrative. The harmonic structure never interrupted the onward pulse of the Prelude or the jaunty dance movements. The stately Sarabande was a gem. Contrasting soft passages were judged perfectly with an evenness of touch that coaxed the audience to listen all the harder.

Allan joined Robert for the next two pieces by Zenamon and Massanet. In the Reflexos no. 6 the first Fluido movement seemed to conjure up an urban landscape while the Doloroso was more reflective. In the Massanet Elegy, the musical understanding for the variation in tempo and balance was superb.

Manuel de Falla’s compositions have made a lasting impression on the music of Spain and the guitar repertoire. Allan’s performance of them was convincing, subtle and technically brilliant. Acknowledging the appreciative applause at the end of the concert, the pair played JS Bach’s delightful Arioso as an encore.

Inverurie Music wish to thank St Mary’s for the use of the church and providing refreshments at the interval. 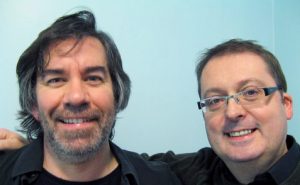