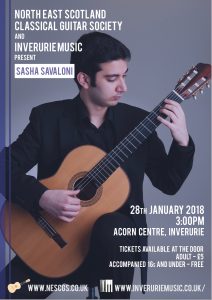 Inverurie Music and the North East Scotland Classical Guitar Society are together staging a “popup” concert at the Acorn Centre Inverurie on Sunday 28th January at 3pm.Scottish Iranian guitarist Sasha Savaloni will be playing some beautiful music featuring:

A rising star of the classical guitar world Sasha has won many awards and was last heard in town last year when as a recipient of the coveted Enterprise Music Scotland Residency award, he and soprano Alison McNeill teamed up for a delightful Inverurie Music concert. His virtuosic playing is warm, mellifluous and engaging with a mature emotional core and is just unmissable. This concert is a welcome late addition to Inverurie Music’s published programme. It will last for under one hour at the Acorn Centre after which refreshments will be available.

For a mere £5.00 (accompanied children free) this represents a great opportunity for a memorable musical Sunday afternoon. The event is also very suitable for children —- get them away from a screen for an hour! Tickets at the door. 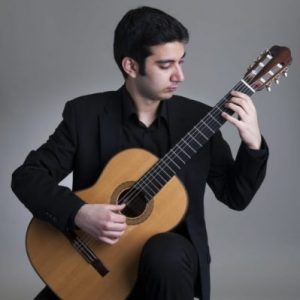