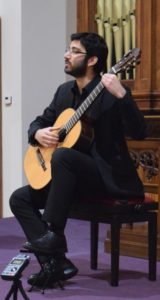 On a wet Sunday afternoon an audience of over 60 people enjoyed a stunning concert given by Scotland-based guitarist Sasha Savaloni at the Acorn Centre, Inverurie. The short recital was the first collaboration between Inverurie Music and the North East Scotland Classical Guitar Society. Sasha played a varied repertoire commencing with a guitar transcription of two lute pieces by John Dowland. This was followed by two Spanish pieces, Asturias by Albeniz and Spanish Dance number 5 by Granados…..generally well-known and enjoyed and here sensitively played by this warm engaging guitarist. By way of contrast, this was followed by a composition by the modern Japanese composer Toru Takemitsu. Sasha closed his recital with three adaptations of songs by Franz Schubert, two arranged by Sasha himself. The music was uplifting and just beautiful; Sasha played with great skill and sensitivity and will be welcomed as a friend to both societies for many years to come.